The Spring salmon run enters the Dee from December onwards, peaking in May. Following international trends this Spring run is well down on historical records. Sea Trout and grilse start running in May to provide added sport and variety through to August.

The Autumn run of salmon, although rather ignored at Cairnton in the past, is becoming increasingly significant for the lower reaches of the Dee.

The Dee Salmon Fishing Improvement Association (DSFIA) has formulated an action plan to restore Spring runs. This includes habitat development, a hatchery, bank protection and vermin control as well as a conservation code to limit numbers of fish taken out. Cairnton is committed to the DSFIA measures: as well as contributing pro-rata to DSFIA expenditure, an additional £10 per rod per week is donated out of rents received. In addition Cairnton has played a founding role in the establishment of the Middle Dee Project which is a privately funded initiative complementing the activities of DSFIA. Notable achievements include the establishment of a hatchery on Cairnton, and the de-silting of miles of local stream-bed allowing spawning salmon to build their redds.

The fishing is let on the basis that the conservation code will be strictly observed; see the fishing rules page for details. 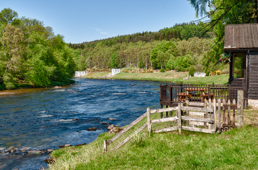